Access to healthcare will be made simple, proficient and quick for residents in the districts of Billstedt and Horn in Hamburg. This has been made possible by the first health kiosk in Germany, which was officially opened on 28th August 2017.

Access to healthcare will be made simple, proficient and quick for residents in the districts of Billstedt and Horn in Hamburg. This has been made possible by the first health kiosk in Germany, which was officially opened on 28th August 2017. The new, straight-forward service based on international models is part of a healthcare network developed jointly in the districts of Billstedt and Horn by the regional integrator company “Gesundheit für Billstedt/Horn UG” with its main shareholders, the physician network of  Billstedt-Horn,  the health management company OptiMedis AG and the local district hospital. The project was sponsored by the innovation fund, with resources from state health insurers. “This health kiosk is an innovative project that provides patients in Billstedt and Horn with a new, straight-forward healthcare and advisory service to increase their healthcare knowledge. Such initiatives are an important foundation for the further development and improvement of healthcare, especially in more socially deprived parts of the cities”, said Hamburg’s healthcare senator, Cornelia Prüfer-Storcks, at the opening ceremony. 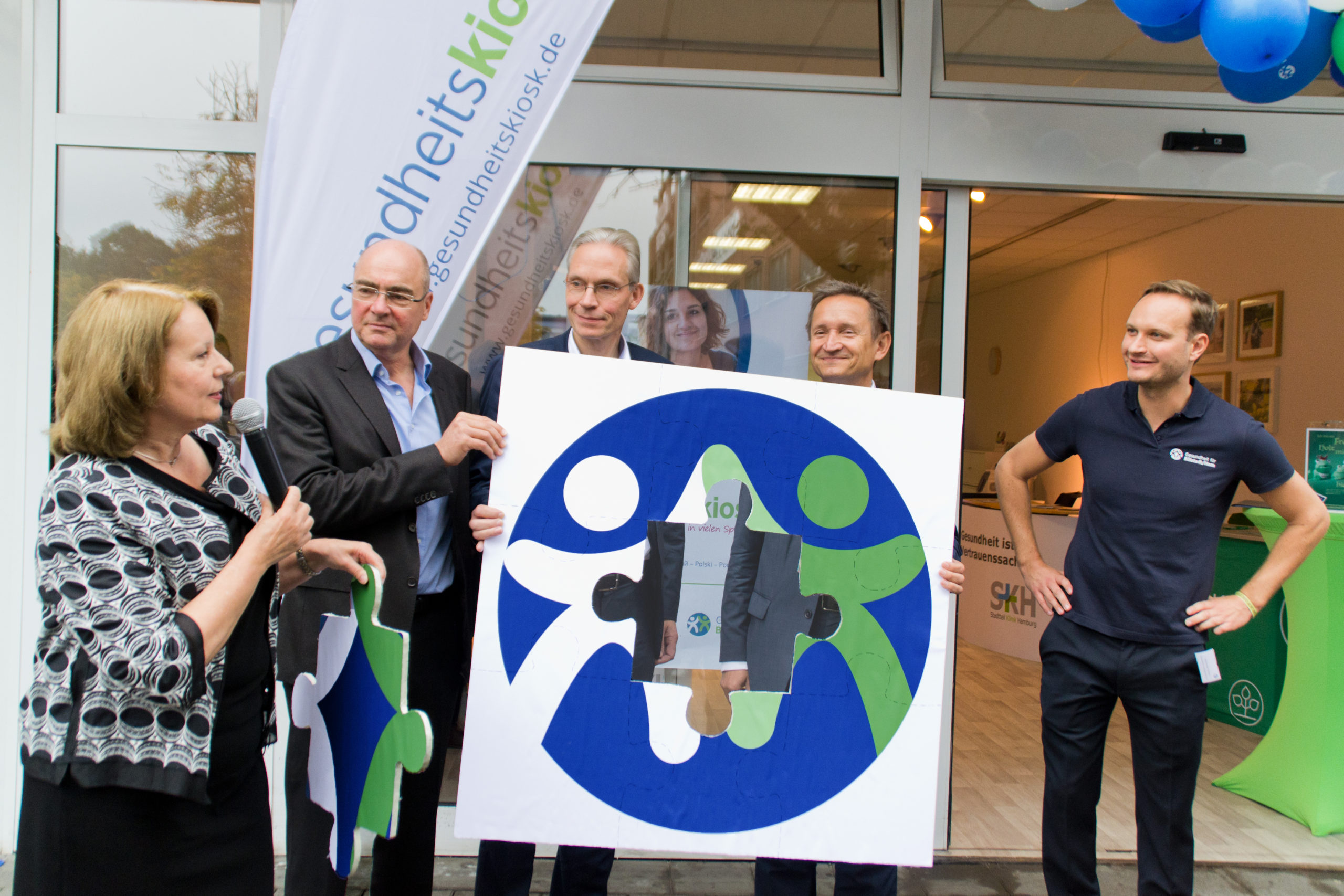 The range of services offered by the health kiosk is vast: The medically trained and multilingual team advises patients before and after doctors’ appointments, coordinates treatment steps, and communicates with establishments and organisations in the district. The aim of the project initiators and partners is not only to close existing gaps in healthcare but to also increase healthcare and prevention measures in these parts of the city. “Chronic illnesses such as diabetes occur in Billstedt/Horn almost ten years earlier than the average in Hamburg. We want to change that”, said Matthias Mohrmann, member of the board at the health insurance company AOK Rheinland/Hamburg. “The health kiosk is an important step towards healthcare that is better orientated towards people and that people can access in their everyday lives.”

With its broad advisory service, the health kiosk will also help patients become experts in their own health matters. “The goal is to improve the healthcare knowledge of patients and activate them more to use their own initiatives regarding their health”, explained Dr.h.c. Helmut Hildebrandt, managing director of “Gesundheit für Billstedt/Horn UG”. Doctors from these parts of the city also see great benefits, as summarised by registered specialist physician Dr. Gerd Fass, one of the initiators of the healthcare network: “The advisory service increases the effectiveness of our medical recommendations and helps patients sustainably change their behaviour.”

Advice at the health kiosk is free. As well as German, the kiosk staff speak the languages most frequently used in these parts of the city, including Turkish, Russian, Polish, Spanish, English, Portuguese, Dari and Farsi. In preparation for their work, the employees have undergone intensive training over the past few months, of which a major part was training run by the institute and polyclinic for general medicine at the University Medical Center Hamburg-Eppendorf and shadowing at medical practices and district institutions.

Over the past three months, the concept of the health kiosk has been trialled as part of a test phase in Mümmelmannsberg. “The service was received very well by patients”, said Fass. So far, over 280 residents of Billstedt and Horn have made use of the advisory service. “It is mainly patients with language difficulties who benefit from the advice and intermediation.”

In order to gauge the success of the health kiosk, Hamburg Center for Health Economics (HCHE) at Universität Hamburg, under the guidance of Prof. Dr. Jonas Schreyögg, is evaluating the project. The satisfaction of the patients and their level of activation, amongst other things, are also being determined. The project is focused on the long term, with the aim of further actors and health insurers becoming involved.

The health kiosk model is based on the terveyskioski kiosks in Finland. There are also similar concepts in the USA: in so-called retail clinics, which can be found in shopping centres, supermarkets and pharmacies, where primary care and health advice services are provided. The service is based on the “walk-in” principle, without the need for prior booking. In general, the retail clinics and the terveyskioski kiosks in Finland are for initial advice or the provision of initial information for the visitors’ concerns.

Press images can be downloaded in our newsroom.

Gesundheit für Billstedt/Horn UG is a team of local doctors and healthcare experts who are building up an integrated, patient-orientated healthcare network in Billstedt, Horn and Mümmelmannsberg. The objective is to improve medical care and the health of members of the population who, because of their social status, do not have as many life or healthcare opportunities as people in other parts of Hamburg. The founding members are Ärztenetz Billstedt-Horn e.V. (60 percent stake), OptiMedis AG (30 percent), SKH Stadtteilklinik Hamburg GmbH and NAV Virchow-Bund – Verband der niedergelassenen Ärzte Deutschlands e.V. (5 percent each). www.gesundheit-bh.de

Insuring around 3 million people, AOK Rheinland/Hamburg is the eighth-largest state health insurer in Germany, and has approximately 8,000 employees. With a market share of around 20 percent, it is the second-largest insurer in Hamburg. Its total annual budget is 11.9 billion euros. In the Rhineland and Hamburg, it has more than 100 offices open to serve its members. The AOK service centre, Clarimedis, is open 24 hours, 365 days per year (0800 0 326326). www.rh.aok.de.

About the innovation fund

The innovation fund will be paying 300 million euros each year until 2019 for the research and further development of state health insurance services. The funds come from the healthcare fund’s liquidity reserve.